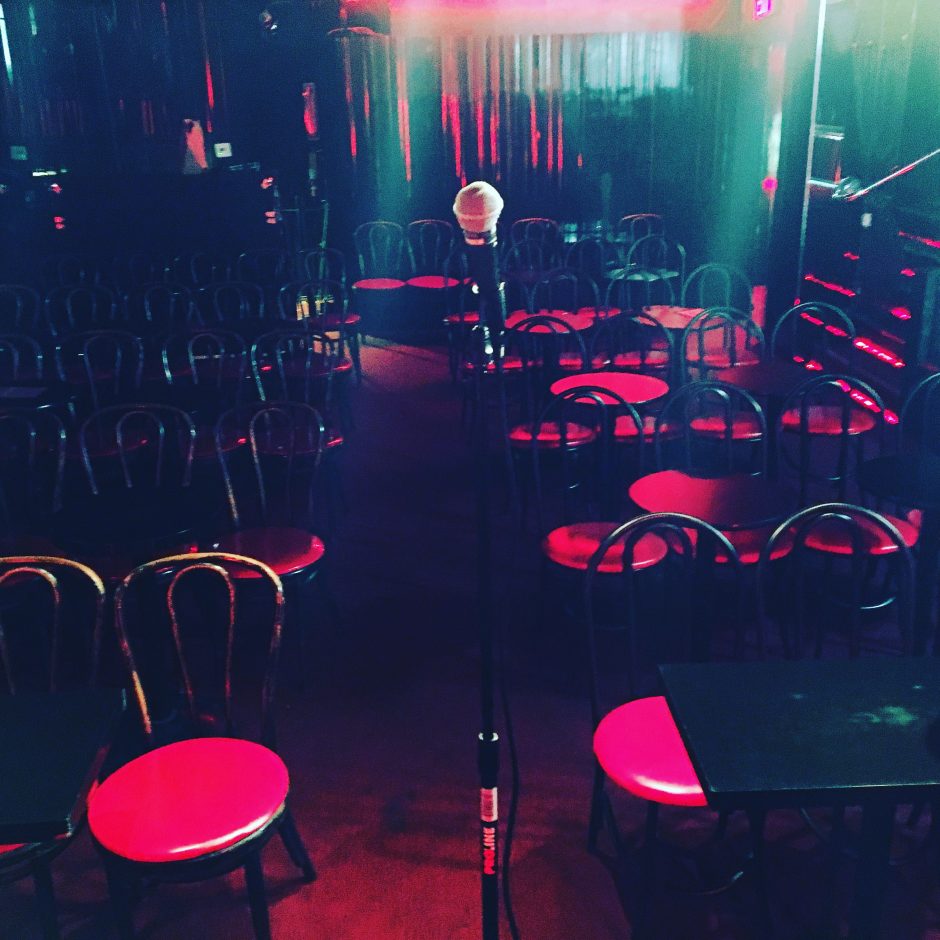 It’s not often true friendship and show-business combine. No matter how hard you try, you really can’t like everyone. Everyone you like might like you less. What’s the old saying by used by jerks to justify the hack crappy behavior? “It’s show business not show friends!” Who needs 30 pieces of silver when you have a spot to perform at a pub that used to be a comedy club? Alliances and rivalries come and go at the drop of a hat. Despite all your cynicism, and self-doubt, you meet someone and you make a real friend.

No longer do you watch other comics with a sniper’s eye view, hoping and praying for them to trip up, bomb, and die a horrific death on stage which would hopefully lead to nothing short of a good old-fashioned whupping. You start to see this person’s artistic and professional advancement as a good thing and well deserved. You catch each other’s shows when in town and not do anything else. When the chips are down off the stage, you got each other’s back. Help each other move, crash on the couch, share rides to gigs, mics and just hang out. And then, the unexpected happens.

Laff Stop, Houston, Texas late Saturday night, Outlaw comic, Carl LaBove has a restless sold-out crowd and my good friend Theodore M.E. Taylor is opening tonight. This is the third and final show of the night. Feeling claustrophobic, Theo heads to the green room and chills out. Minutes pass, the straggling drunks from the second show finally settle their tabs with the wait staff and get out. Seating begins and ends with military-like precision. I decide to get my stage right peanut gallery view of the stage.

LADIES AND GENTLEMEN WELCOME TO THE LAFF STOP! THE OLDEST COMEDY CLUB IN TEXAS, TONIGHT WE HAVE ONE OF THE ORIGINAL OUTLAWS OF COMEDY, JUST RECORDED A COMEDY SPECIAL SHOWTIME AND WILL BE SEEN ON BIOGRAPHY! GIVE IT UP FOR CARL LaBOVE!

The audience goes wild with applause.

The applause gets louder.

AND NOW GIVE IT UP FOR YOUR HOST AND EMCEE FOR TONIGHT! THEODORE M.E. TAYLOR!

Then, I realize Theo is still in the greenroom.

WILL THEODORE M.E. TAYLOR PLEASE COME TO THE STAGE!

Split Second, I think to myself, Aw Screw it!

I think opportunity has knocked and I run-up to the stage.

I got this friend that wants to fuck a dwarf.

A wave of laughter devours the stage.

Alright, it’s me. Hold on. Let me explain. I’m just in it for the story. Just about every hack comic has them I screwed a little person story. They’re all pretty much the usual I fucked one, please insert a small joke with a pun here. Doug Stanhope actually claimed to have hooked up with a little person and he doesn’t even have a story or joke for it. There have to be more variations on the genre of little person fucking? Is there a Jack Kerouac beat-inspired story popping with confusion, jazz, and Benzedrine? Where’s the young dwarf coming of age tale? The Anne Rice dwarf fucking story that spends 5 pages detailing the stitches of clothing on the dwarf’s dress. There has to be more to this sub-genre.

Well, at least for a split second inside my head.

Cause quite honestly I don’t do that set and never had because it sucks and you can’t polish a self indulgent turd. That sort of set would earn you multiple upper cuts between your legs by dwarf comic Lil’ Rob Armstrong.

As reality crashes in and I bolt to the green room, and shout, “THEO! GET YOUR ASS TO THE STAGE!”

“I’m coming! I’m coming!”, Theo shouts as he runs to the showroom.

Theo sprints to the stage and has an awesome show.

“What The?” I tell Theo after the show.

‘You know, Al if it were you late for the stage, I would of taken your spot.’ Theo tells me.

“In a New York Minute!”, Theo assures me.

Trust me the thought has entered my mind. Yet, I feel content. Something must be wrong with me.

You know what’s not wrong with me? Catching me live on stage and having some laughs! Saturday I’m performing at a Pacific Plate Brewery with Eddie Pepitone and many more funny folks in “Punchline for Pangolins” All the money raised goes to Johannesburg Wild Life Vet and Global Conservation Force. You can get tickets here!

And I’ll be in Toluca Lake Monday opening for Martin Moreno, Felicia Michaels, Jill Kimmel, John DiResta and many more funny folks at Korrupted Comedy LA at Mrs. Robinson’s Irish Pub! You can get your tickets here!