Sometimes you have to accept there are forces beyond your control, like arson.

“I think it’s safe to say, we all called it as an arson”, I say as we all nod in agreement.

The end of a comedy room rarely gives comics a sense of closure. When it happens, it is the exact opposite.

Angst festers in your gut then bubbles up through your chest burning a trail of venom through your throat and infects your very being.

“Yeah sure why not? What’s around here?”

“There’s a few places around Elgin.”

We all straggle into the closest bar and the mourn the loss of not one but two open mics. The drinks flow, songs are sung, stories are told and the night ends. And we straggle out on our separate ways towards home.

“You know Steve this bar was where the original Late Nite Pie was?”

“You don’t say.”, Steven smirks to himself.

Two years later, that place is a room is that is still running strong.

St. Danes is a mixed bag. Some nights you die. Other nights you fly. It’s loud bar who patrons are a mix of Rice football players, frat boys, business professionals and random folks tempted with the promise of 35 cents wings and 3 dollar beers.

The Comics are a ragtag line up of pros, semi-pro, amateurs, promising hopefuls, the hopeless and the attention starved. Imperfect, unpredictable, unforgiving and affirming. It’s Houston Comedy at it’s best and worst on a Thursday Night. 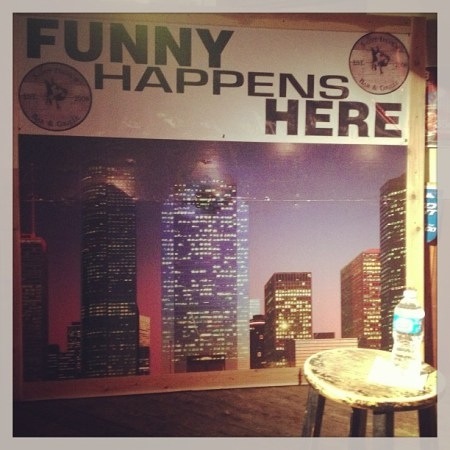